Blurb: The only thing John Shaft wanted was a simple case, one where no one got hurt or killed. He figured working as a consultant on a low budget film would be easy money. He was wrong… dead wrong.

David Walker’s second Shaft comic book series, which follows last year’s excellent Shaft: A Complicated Man, has an altogether different tone to that hard-hitting debut. There is a dark satirical feel to a story that explores the underbelly of the sleazy porn industry in 1970s New York. Not only does Walker tackle this in graphic detail, but he also challenges Shaft’s own homophobic viewpoint by having his client/sidekick be a gay teenager. Finally with Shaft also hired as consultant to a Blaxploitation movie, which turns out to be a horrendous parody of the real Shaft film, Walker throws his own punches at the producers of the new Shaft film in development – which is reported to be taking a more comedic tone. 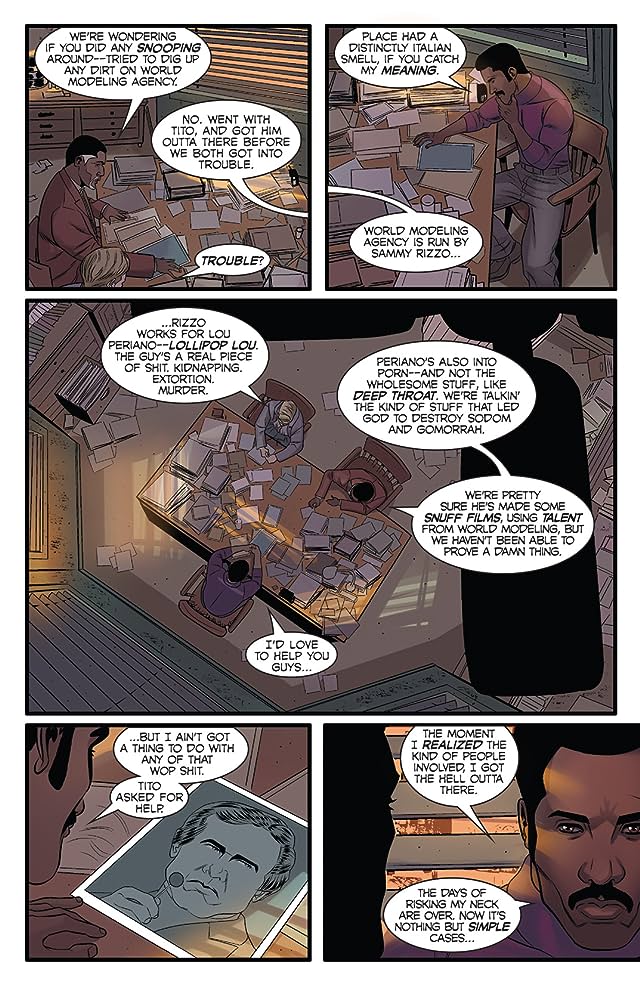 This series features the art work of Dietrich Smith (replacing the more textural Bilquis Everly) and the bold colouring of Alex Guimares. Together they create a colourful view of 1970s NYC and present memorable characters that complement perfectly Walker’s tough script. There is an excellent sequence at the start of issue 3 in Shaft’s office where he is in discussion with two NYPD vice cops that is beautifully illustrated. In turn, Walker continues to have fun with Tidyman’s creation and obviously enjoys exploring the more satirical aspects of his story.

Whilst Shaft: Imitation of Life doesn’t quite match the levels of brilliance of its predecessor, it is still an entertaining ride with aspects of social commentary added to a winning formula. Here’s looking forward to a third series from Walker and co. very soon.

The first reviews of the final issue of Shaft: Imitation of Life – Part Four: All the World’s a Stage are in:-

“…a tense issue that concludes the series in terrific fashion. David F. Walker’s script balances the action with thematic content, giving a layer of depth to the issue that could have easily spiraled into simply being a fiery conclusion. Artist Dietrich Smith and colorist Alex Guimaráes’ bring the world to life in theatrical fashion, heightening the drama of the story. In short, Shaft: Imitation of Life #4 is a fantastic ending to a superb series, worthy of John Shaft.” – Robert Reed, AdventuresinPoorTaste.com

“Writer David F. Walker oozes the aesthetic of this time period and the visuals from Dietrich Smith and Alex Guimaraes take the reader right back to the era of polyester and shag carpets. Wonderful work.” – Hannibal Tabu, ComicBookResources.com

“David Walker and Dietrich Smith’s sequel to last year’s superb “Shaft” six-parter does so, as well, wrapping things up with a bow and some clever-if-somewhat-obvious “metafictional” nods to John Shaft’s place in popular culture history. Can we get another series next year, please?” – Alex K Cossa, GraphicPolicy.com

5-page previews, such as the one at ComicBookResources.com, are today surfacing for the final issue (#4) of Shaft: Imitation of Life subtitled All the World’s a Stage. Release comes slightly later than planned on Wednesday 25 May.

Google Books has uploaded a preview of issue 4 of Shaft: Imitation of Life subtitled All the World’s a Stage. This is the final part of the second Shaft comic book series written by David F. Walker with art work by Dietrich Smith and is scheduled for release on 18 May. 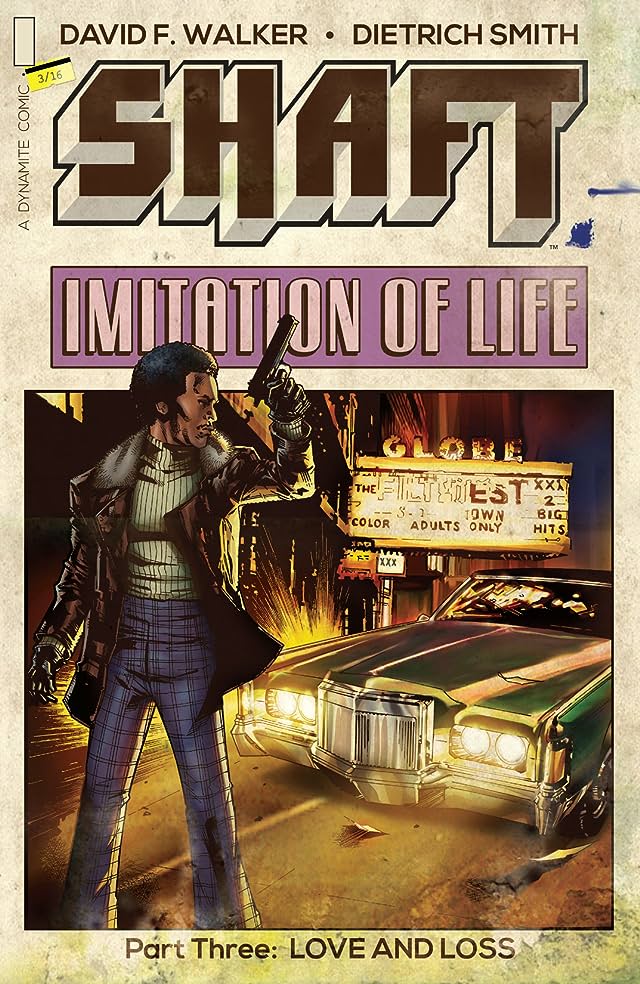 Shaft: Imitation of Life #3 was released today and the reviews are coming in.

“Walker’s ability to bounce between humour and tension keeps the story engaging and ensures that readers will want to come back for the finale.” – Robert Reed, AdventuresInPoorTaste.com

“David Walker has nailed the character in Shaft Imitation of life #3 and the feel to perfection and Dietrich Smith’s artwork is subtle yet raunchy. We could be back in 1975 but this is even better!” – Gary Orchard, MultiVerse

“Highly entertaining, intensely re-readable and — even looking at its unfortunate cultural trappings, given the mores of the era — super entertaining.” – ComicBookResource David Walker interlinks the continuing story of the missing Mike Prosser with Shaft’s being hired as a consultant to work on a movie based on himself. The latter case is deemed to be “Easy Money” for Shaft as opposed to the Prosser case on which he is now solely helping Tito Salazar out as a favour. When Shaft and Tito come across Mafia gangsters running a porn business, Shaft bows out and opts for the easy cash instead. But the opening pages, set three weeks ahead show that Shaft will once again have to tough it out protecting the movie’s star. 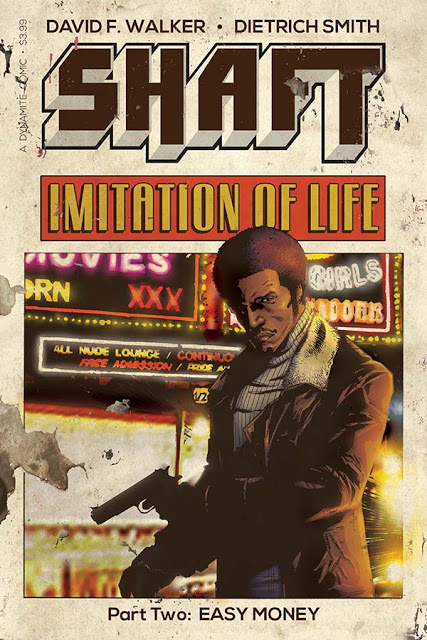 Issue #2 of David F Walker’s comic book Shaft: Imitation of Life was published on 9 March and reactions from the comic book fraternity are again very positive.

Enrique Rea at Spartantown awards the issue 4-stars and says: “Walker’s best asset is Shaft himself. A larger-than-life figure you can’t take your eyes off of. It’ll be interesting to see how this missing persons case will linger going forward to the two remaining issues. The art [by Dietrich Smith] is incredible and Walker knows his hero so well, ‘Shaft’ is an engaging series that deserves to be read.”

Dan Seitz at Uproxx rates the issue third in his top 20 releases of the week and says: “Smith’s layout work and vivid art stand out especially here, as Shaft starts working on a parody of, well, Shaft. Still, it’s the soul of Shaft that makes this a great book, and a must-read.”

Sal Lucci at Unwinnable says: “Walker continues to show why he’s the right person to helm a new Shaft series. He’s got Tidyman’s tone down pat but his own style shines through.”

Amani Cooper at OutrightGeekery says: “The story seems to bounce around a bit. Its one thing on top of another on top of his own internal monologue. It would be great to see Walker tone it down a bit or dedicate an issue to Shaft’s back story. Dietrich’s art is great. I love the bright colors and great fashion. I don’t know much about the 1970’s, but I feel like this story and art gives a pretty good look into it.”

Google Books now features a preview of Part Two of David F. Walker’s Shaft: Imitation of Life, which is subtitled Easy Money and due out from Dynamite Comics on 9 March 2016.

Blurb: After a high profile case that put him in the headlines, private detective John Shaft is looking for something low profile and easy that will keep him out of the spotlight and out of danger. Shaft takes a missing person case that proves to be more difficult than he initially thought. At the same time, he is hired to be a consultant on a low budget film that may or may not be based on his life, and proves to be as dangerous as any job he’s ever had. But when there’s danger all about, John Shaft is the cat that won’t cop out – even if it means squaring off against sadistic gangsters that want him dead.

David Walker returns to Shaft for a second comic book series. This one will run to four issues (compared to the six for 2014/15’s Shaft: A Complicated Man).

Walker’s second story takes place some two months after the events of Ernest Tidyman’s novel Shaft. His use of first person narration allows the reader into Shaft’s mind as he explains the events in his life that created the violent monster that lies within him over a reprise of the rescue of Beatrice Persons (daughter of Harlem crime lord Knocks Persons) from the Mafia in Tidyman’s original novel. The voice Walker gives Shaft remains true to the character we read and learn about in Tidyman’s books, but where Tidyman would merely reference these events Walker chooses to explore their effect on Shaft’s psyche, thereby adding significant depth to his character.

Walker has a strong understanding of the John Shaft of the books and for fans there are some nice nods to that series here. But the main set-up for this story is Shaft being hired to find an up-state couple’s young gay son – Mike Prosser, who has come to New York in search of adventure. Walker does not shy away from Shaft’s homophobic attitude (very clear in Tidyman’s novels), but cleverly uses it as a way to get Shaft to look inwardly at his personal motivations and prejudices. His only lead is another young gay man, Tito Salazar, who Shaft rescues from a beating by a group of bigots outside the famous Stonewall Inn. The artwork here is by Dietrich Smith (taking over from Bilquis Evely). Smith’s style is less precise than Evely’s but he creates a great feel for the period and the streets of New York and Alex Guimares’ colouring is much more bold. In the first series Walker and Evely were keen to capture Shaft as Tidyman had described him (notably without the moustache that became synonymous with the character from Richard Roundtree’s portrayal on the big screen). Here, Walker and Smith wisely transition him to Roundtree’s familiar image and Smith does a great job in capturing Shaft’s iconic look.

This is an intriguing read and It will be interesting to see where Walker takes his story over the next three issues. Based on this first issue Shaft: Imitation of Life promises to repeat the success of Walker’s exceptional first series. A number of early reviews have been published for the first issue of David F Walker’s latest Shaft comic book series, subtitled Imitation of Life. The series features artwork by Dietrich Smith and colouring by Alex Guimares. The cover painting is by Matthew Clark and Vincius Andrade. The response so far has been universally positive:

InvestComics: “The pacing is smooth and very cinematic- it flowed so well I read it twice.” – Ian Powers

ComicWow!: “This is, finally, a PI story that stands out from all the rest. It has an awesome, almost noir feeling to it, so I would unquestionably recommend checking it out. You will most definitely not be disappointed.” – Bhavna Bakshi

OutrightGeekery: “David Walker tells a good story. Throwing in flashbacks of Shaft’s life helps to put his point across, Shaft’s inner monster. Along with that was a lot of inner monologue. Dietrich Smiths art is great.” – Amani Cooper

BigComicPage: “All the hallmarks of a cool, stylish Shaft story are there – only this time there’s a much darker edge than we’re accustomed to, taking us down some routes reminiscent of Cruising.”

DailyGrindHouse: “…the comic-book version of John Shaft is now Walker’s baby, and frankly I can’t conceive of anyone else even wanting to take the reins if and when he decides he’s had enough.”

ComicBastards: “With all the cultural conflicts naturally setup and David Walker’s talent for contextualizing internal dialogue I expect this will be a series worthy of our attention.” – Patrick Self

NerdSpan: “John Shaft has never felt as vital, as complete, or as ready for modern times. Do yourself a favour – put the parodies to the back of your mind, and go grab this book.” – MacKenzie and Walker

AIPT!: “David Walker’s script allows for Shaft to be both a certified badass while being surprisingly vulnerable. Dietrich Smith and Alex Guimares give the book a fantastic swagger worthy of the character while also excelling at creating tension in the smaller character moments.” – Robert Reed

Graphic Policy: “As always , Walker adds new depth and dimension to the character without compromising an ounce of bad-ass, while new artist Dietrich Smith picks up admirably from Bilquis Evely.”

ComicsVerse: “I look forward to watching Walker further develop Shaft’s character over the course of this mini-series. And if part one is any indication, SHAFT: IMITATION OF LIFE is going to be a wild success.”