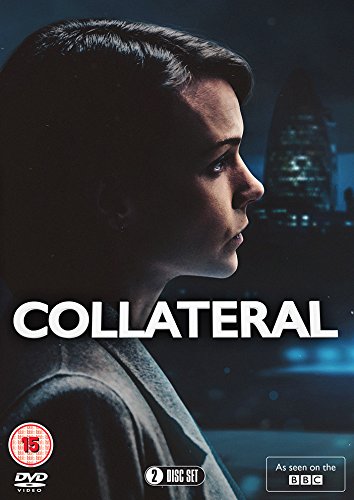 Collateral (TV) (2017; UK; Colour; 4 x 60m) ***½  pr. Elizabeth Binns; d. S.J. Clarkson; w. David Hare; ph. Balazs Bolygo; m. Ruth Barrett. Cast:  Carey Mulligan, Jeany Spark, Nicola Walker, Nathaniel Martello-White, John Simm, Ahd, Billie Piper, Kae Alexander, Hayley Squires, July Namir, Ben Miles, Orla Brady, Rob Jarvis.  An employee of a pizza delivery service is gunned down on the street in a south London suburb after delivering a pizza to the ex-wife of the Shadow Minister for Transport. DI Kip Glaspie (Mulligan) is assigned to investigate the case leading her to uncovering an elaborate people smuggling operation. An impressive cast and a dark and witty script from Hare lift this above the average TV spy/detective fare. Mulligan delivers a very natural and believable performance, whilst Simm, as the MP the opposition party would rather forget, is excellent at conveying the positive side of a deeply flawed character, drawing the viewer’s sympathies and delivering some of the Hare’s best lines. Piper is biting as his ex-partner. Spark also scores as a soldier tainted by what she has witnessed on tour in Iraq. The spy business is put across less successfully and feels a little overplayed at times and the story lacks a clear resolution, but on the whole this is a well-acted and directed drama that offers up much to recommend, despite ultimately failing to fulfil expectations. [15]

Comment: The Slitheen (or rather one of them), first seen in the earlier Aliens of London/World War Three, return in this uneven episode, which mixes juvenile humour, in the entrapment of Annette Badland’s alien, with commentary on the Doctor’s unwillingness to face the effects of the changes he instigates. The episode is best when tackling the latter issues packaged around a restaurant dinner in which Badland’s Slitheen prods and pokes at the Doctor’s conscience. There is also the reuniting of Piper’s Rose with Clarke’s Mickey and Clarke manages to at last add some depth to his character. Barrowman continues to impress as Captain Jack, but in more of a support role here. The finale adds a little spectacle to the proceedings and the denouement is fairly neat. But overall the episode is another struggling to find the balance between the serious and the silly. In retrospect it is easy to understand Davies’ broad brush approach during this first season, with him being keen to attract a wide enough audience back to the series after its lengthy absence. Fortunately he would get it right in the season’s finale. 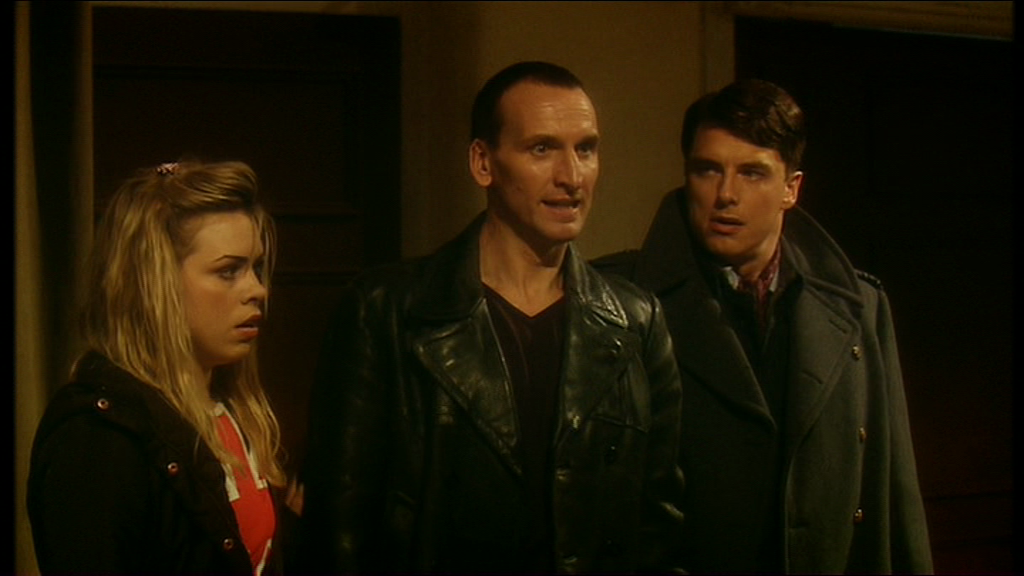 Comment: Powerful and emotive episode that tugs at the heartstrings like no other story in the series to date. Cornell’s script may feel manipulative, but it plays nicely against the paradox of time travel. Ahearne also directs with energy and encourages exceptional performances from the main cast. By now Eccleston and Piper have established a strong enough rapport for the audience to believe Rose when she says the Doctor can never leave her. Dingwall is also excellent as Rose’s father, who’s bickering relationship with her mother bursts Rose’s idealistic fantasy of an idyllic marriage. The denouement is sympathetically played and is guaranteed not to leave a dry eye in the house.

THE LONG GAME
1 episode / 45m / 7 May 2005
Rating: ∗∗½
Writer: Russell T Davies
Director: Brian Grant
Cast: Christopher Eccleston (The Doctor), Billie Piper (Rose Tyler), Bruno Langley (Adam), Colin Prockter (Head Chef), Christine Adams (Cathica), Anna Maxwell-Martin (Suki), Simon Pegg (The Editor), Tamsin Greig (Nurse), Judy Holt (Adam’s Mum).
Plot: Adam discovers the wonders of travelling in the Tardis. In the far future, Satellite 5 broadcasts to the entire Earth Empire. But anyone promoted to Floor 500 is never seen again, and the Doctor suspects mankind is being manipulated. Does Adam have what it takes to become the Time Lord’s companion?
Comment: This episode is largely unremarkable and is the second in this series (after THE END OF THE WORLD) to use a space station setting. The premise doesn’t hold up to close scrutiny and the CGI monster of the week does little but show its fangs. Simon Pegg adds some wit to the proceedings as The Editor, but outside of the regulars the cast is largely unremarkable – save for Tamsin Greig’s poker-faced nurse. The direction by Grant is quite flat but there are a couple of memorable sequences – notably as Maxwell-Martin’s Suki explores Floor 500. A trend has been setting in through the series in that lead writer, Davies, has been responsible for the weaker scripts to date. Grand ideas lacking in logic and often held back by juvenile humour. Thankfully here that is kept in check and whilst the story fails to excite, it is not a disaster – merely bland. Also, thankfully, Langley was not kept on as a companion.

2015 is the 10th anniversary of the return of one of British TV’s most historic shows – Doctor Who. Having also recently celebrated 50 years since its inception in 1963, the show continues to delight fans both old and new. To celebrate I have decided to revisit each episode from the re-launch masterminded by Russell T Davies, so here goes… Plot: Rose Tyler is just an ordinary shop worker living an ordinary life in 21st century Britain. But that life is turned upside down when a strange man calling himself The Doctor drags her into an alien invasion attempt!
Comment: Introductory stories are always difficult to pull off due to the elements they are required to juggle – not least of which are the introduction of the main characters to the audience and the tone they set for the series. The stories are therefore often of secondary importance as a result and this is no exception with a lot to cram into its 45-minute running time. On the whole the episode works well in its purpose, although some of the comedy is played too broadly – notably Clarke’s Mickey and the CGI burping dustbin. The climax is well staged however as the Auton dummies spring to life in a busy shopping centre and wreak havoc as the Doctor tries to negotiate with the Nestene Consiousness. Eccleston is an atypical Doctor, simply costumed in a battered leather jacket, and merely hints here at the range he would display as the series progressed. Reference is made to his northern accent. Tyler is excellent as Rose as is Coduri as her mother, the flirty Jackie.