View to a Kill, A (1985; UK/USA; Metrocolor; 131m) ∗∗½  d. John Glen; w. Richard Maibaum, Michael G. Wilson; ph. Alan Hume; m. John Barry.  Cast: Roger Moore, Christopher Walken, Tanya Roberts, Grace Jones, Patrick Macnee, Patrick Bauchau, David Yip, Fiona Fullerton, Manning Redwood, Alison Doody, Willoughby Gray, Desmond Llewelyn, Robert Brown, Lois Maxwell, Walter Gotell, Geoffrey Keen. An investigation of a horse-racing scam leads 007 to a mad industrialist who plans to create a worldwide microchip monopoly by destroying California’s Silicon Valley. Moore’s last outing has an end-of-term feel about it. The plot recycles GOLDFINGER, but the creative energy that made that film so enjoyable is sadly missing here. All the boxes are ticked but without the enthusiasm or originality that made the earlier films so special. Based on the short story “From a View to a Kill” by Ian Fleming. [PG]

This week has been a bumper one for Genesis fans with four re-releases – two each for Phil Collins and Tony Banks. Collins has continued his Take a Look at Me Now reissue/remaster campaign with HELLO, I MUST BE GOING! (1982) and DANCE INTO THE LIGHT (1996) whilst Banks has commenced his with A CURIOUS FEELING (1979) and THE FUGITIVE (1982) both of which have been remixed and remastered. Engineer Nick Davis has worked on both projects.

Collins released HELLO, I MUST BE GOING! nearly two years after his debut FACE VALUE and between the Genesis albums ABACAB (1981) and GENESIS (1983). Like his debut this album contains a wide variety of musical styles and whilst as a whole it does not quite match its predecessor, this is still an impressive follow-up. Standouts include the bitterness and anger of the drum propelled “I Don’t Care Anymore”, the heart-wrenching “Don’t Let Him Steel Your Heart Away”, the dark and brooding “Do You Know, Do You Care” and the big band inspired “The West Side”. There is also the melancholy of the closing “Why Can’t it Wait ‘Til Morning” and the brass driven duo “I Cannot Believe it’s True” and “It Don’t Matter to Me”. The album is perhaps best known for Collins’ first UK solo number 1 with his cover of Diana Ross and the Supremes’ Motown hit “You Can’t Hurry Love”. There is the occasional misstep – “Thru These Walls” comes across as a little too creepy and recycles Collins’ signature drum fill from “In the Air Tonight” and “Like China” feels a little forced in trying to create its cockney geezer charm – but this is a very solid album that would lift Collins a step closer to super-stardom. The second CD features demos and live tracks, which will be of interest to fans.

1996’s DANCE INTO THE LIGHT was Collins’ first album following his announced departure from Genesis, although he would return to the fold in 2007. The album mixes Collins’ standard soulful approach (“Dance into the Light” and “Oughta Know By Now”) with Beatlesque pop (“That’s What You Said”, “Love Police”, “It’s in Your Eyes” and “No Matter Who”) and African rhythms (“Lorenzo”, “River So Wide”, “Take Me Down”). “Wear My Hat” is Collins’ riff on Paul Simon’s “You Can Call Me Al” and there is the warm romanticism of “The Same Moon”. He even finds a place for some social commentary in “Just Another Story”. With his star on the descent following some bad press in the media surrounding his split from his second wife, the album feels as if Collins is throwing out a number of hooks in an attempt to gain a commercial bite. He even finished the album with a bombastic cover of Bob Dylan’s “The Times are A-Changing”. The result is an album that fails to fully satisfy despite some strong songs. In attempting to follow other artist’s styles, Collins seemed to have lost his own voice. Two of his best songs from the sessions sit on the second CD amongst live tracks and demos. The reflective “Another Time” and melancholic “It’s Over” show Collins could still write very strong personal songs. 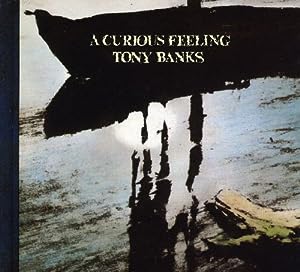 Tony Banks found time between Genesis’ …AND THEN THERE WERE THREE… (1978) and DUKE (1980) to record his debut solo album A CURIOUS FEELING. Banks’ story concept for the album of a man rediscovering his life having suffered memory loss was inspired by the short story Flowers for Algernon by Daniel Keyes. String Driven Thing’s Kim Beacon provides warm vocals and the album also features Genesis touring drummer Chester Thompson. Banks plays the rest of the instruments including guitar and bass in addition to his keyboards. The synth-dominant music is pure Banks mixing beautiful soaring instrumentals such as “The Waters of Lethe” and “Forever Morning” with tuneful songs “Lucky Me” and “For a While”. He also stretches out on the romantic “You”, which has one of his best instrument segments to close out the song, and rocks hard on the pounding “Somebody Else’s Dream”. The re-mix has enhanced the sonic spectrum considerably and the songs breathe better as a result. Banks’ solo work would never better this excellent debut.

Like Collins’ HELLO, I MUST BE GOING!, THE FUGITIVE was released in the Genesis hiatus between ABACAB and GENESIS. Here Banks decided to take on the vocal duties himself in an attempt to stamp his own identity on his music. As a result the songs were kept simple following the trends set in the streamlining of the Genesis sound over their previous two albums. Banks’ vocals have a certain charm if not range and the songs here suit his vocal style. The opening reggae infused “This is Love” sets the tone and the songs across the album are all tuneful and sometimes catchy, if less adventurous than those on A CURIOUS FEELING. “And the Wheels Keep Turning” has an infectious hook and “By You” is fluffy synth pop. Bank’s increased use of programmed drum sounds means instrumentals “Thirty-Threes” and “Charm” have a robotic feel to them that plays against Banks’ natural deftness for flowing musical melodies and arrangements. There are flashes of brilliance on the rocking “At the Edge of Night” but other tracks, such as the ballad “Say You’ll Never Leave Me” and the mid-tempo “K2” have a plodding rhythm, which fails to bring life to Banks’ melodies. Again Nick Davis’ remixes have brought out some previously hidden delights on an album that, whilst mixed in quality and execution, has its moments of charm and elegance.

For Your Eyes Only (1981; UK; Technicolor; 127m) ∗∗∗½  d. John Glen; w. Richard Maibaum, Michael G. Wilson; ph. Alan Hume; m. Bill Conti.  Cast: Roger Moore, Carole Bouquet, Topol, Lois Maxwell, Lynn-Holly Johnson, Julian Glover, Jill Bennett, Desmond Llewelyn, Geoffrey Keen, Walter Gotell, Cassandra Harris, Michael Gothard, John Wyman, Jack Hedley, James Villiers. Agent 007 is assigned to hunt for a lost British encryption device and prevent it from falling into enemy hands. This is the straightest Bond for quite some time – and all the better for it. There are occasional lapses in pace and despite giving one of his best perfomances as 007 Moore is beginning to look a little old for the part, but the breathless action sequences deliver plenty of thrills. Conti’s jazzy synth-laden score, however, is the weakest of the series. Based on the short stories “For Your Eyes Only” and “Risico” by Ian Fleming. [PG]

Google Books now features a preview of Part Two of David F. Walker’s Shaft: Imitation of Life, which is subtitled Easy Money and due out from Dynamite Comics on 9 March 2016.

The fourth and final instalment of Shaft: Imitation of Life, subtitled Part Four: All the World’s a Stage is due out in May and Dynamite have released a preview of Matthew Clark’s cover.

Man with the Golden Gun, The (1974; UK; Colour; 125m) ∗∗∗  d. Guy Hamilton; w. Richard Maibaum, Tom Mankiewicz; ph. Ted Moore, Oswald Morris; m. John Barry.  Cast: Roger Moore, Christopher Lee, Britt Ekland, Maud Adams, Hervé Villechaize, Clifton James, Richard Loo, Soon-Tek Oh, Marc Lawrence, Bernard Lee, Lois Maxwell, Marne Maitland, Desmond Llewelyn, James Cossins, Yao Lin Chen. Bond is led to believe that he is targeted by the world’s most expensive assassin and must hunt him down to stop him. Moore’s second outing as 007 starts well, with little reliance on gadgets, but later the action descends into increasingly comedic set-pieces. Lee is a strong villain, but the plot is lacking any threat beyond that to Bond himself. Exotic locations and good production values, but Ekland is given an idiotic role whilst Adams is underused as the Bond girls. Based on the novel by Ian Fleming. [PG]